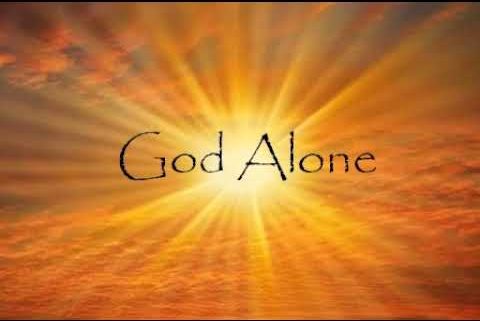 God and God Alone!
Who has done this and carried it through, calling forth the generations from the beginning? I, the Lord—with the first of them and with the last—I am he. Isaiah 41:4

Isaiah 41 begins with God summoning the people from the coastlands or distant lands to appear before him. They are to come near so they can address him. Yet, they are to keep silent before him because they are coming to his courtroom. Hear the latter part of verse 1, “Let us come near together for judgement.” These idolatrous people were being summoned before Yahweh as judge where they should keep silent, but they will get their opportunity to speak. They were also charged to renew their strength. Indeed, if they are going to contest with God, they better come fully ready and prepared.

Yahweh lays out his case by asking six questions, rhetorical ones too. Hear him: “Who raised up one from the east? Who in righteousness called him to his feet? Who gave the nations before him, and made him rule over kings? Who gave them as the dust to his sword, as driven stubble to his bow? Who pursued them, and passed safely by the way that he had not gone with his feet? Who has performed and done it, calling the generations from the beginning?” Yahweh provides the obvious answer: ‘I, the Lord, am the first; and with the last I am He.’ (Vs. 2-4 -NKJV) Hear the Message Version beautiful rendering of verse 4: “Who did this? Who made it happen? Who always gets things started? I did. God. I’m first on the scene. I’m also the last to leave.”

God invites those in distant lands to come and reason with him. He shows them his greatness over all creation, and over all history. They must ask themselves, “Who is in control of the course of human events?” This is always an important issue to reflect on. In this confusing world, people are asking many questions including, is there a point, a direction to human history? Is it just a random, meaningless combination of undirected events? Is it a cycle whose fate is endless repetitiveness? Or, is there a God in heaven who directs human events, always moving to a final resolution and fulfilment? Our answer to these questions influences almost everything in our lives.

God is the first and the last and the in-between. He has a plan for everything and everyone. Our lives are not given over to blind fate, random meaninglessness nor endless cycles with no resolution. God is directing all of life and invites us to place our hands in his and allow him to lead us to purposeful living and triumphant victory. Indeed, only he alone is the sovereign God of the universe!

WEDNESDAY REFLECTION – A Call to Faith