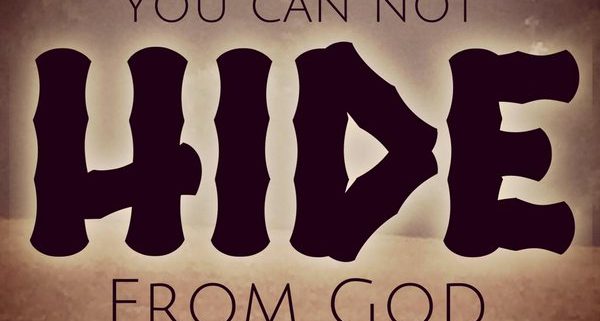 They heard the sound of the Lord God walking in the garden at the time of the evening breeze, and the man and his wife hid themselves from the presence of the Lord God. Genesis 3:8

As I read today’s Watchword, I began thinking about the many games we used to play when I was growing up. One such is ‘hide and seek’. It involves one person hiding away hoping not to be found, while the other(s) was to seek until the person who is hiding is found. Once that person is found, he/she becomes a seeker after another who has gone to hide. The two skills required are to hide so as not to be found, and to seek until we find the person who is hiding.

Sadly, this practice of running away and hiding has followed a lot of us in life in more serious ways. Many have become accustomed to running away once there is trouble or conflict. Many run away from marriages, relationships, jobs, hard work and even church, without any attempt to find a resolution. Their first response is to leave. Many lack the patience, fortitude and sticktuitiveness to deal with any challenging situation. Many also hide when they don’t want to face a situation, especially when they are in the wrong. They lack the courage and also the willingness to admit wrong, so they hide behind excuses and even attempt to hide from God.

Adam and Eve attempted to hide from God when they heard God coming. In the context of today’s text, shortly after being made in God’s image, the first humans were tested. The crux of their choice, and thus the temptation, was that they could ‘be like God’. Up to this point they had implicitly trusted God for everything and taken him at his word for everything. But now they had the choice to leave that behind, to become ‘like God’. They could become ‘gods’ themselves, captains of their own ship, masters of their destiny, being autonomous and answerable only to themselves. Having fallen, they felt shame and tried to cover it up. When God confronts Adam about his breach of covenant, he blames Eve and she in turn blames the serpent. No one would accept responsibility.

What started that day has continued because we have inherited that same innate disposition. We have inherited this nature of Adam and thus innately and willfully we continue the uprising that he started. We may not want to be god of the universe, but we want to be gods in our settings. Bon Jovi’s chorus “It’s my life”, Frank Sinatra’s more sublime “I did it my way”, and Buju Banton’s “I want to rule my destiny” are echoes of this.

Adam and Eve must have learnt two things about the nature of God that is worth noting ourselves. God is omniscient – that is all-knowing – and God is omnipresent – everywhere at the same time. This means that we cannot hide from God. David learnt this when he echoed in Psalm 139: 7-10, “Where can I go from your Spirit? Where can I flee from your presence? If I go up to the heavens, you are there; if I make my bed in the depths, you are there. If I rise on the wings of the dawn, if I settle on the far side of the sea, even there your hand will guide me, your right hand will hold me fast.” Solomon advises, “The eyes of the Lord are in every place” (Proverbs 15:3). So let’s not run away, hide, nor blame others, but face God in penitence, and our situations with faith and a fresh resolve. In the midst of Covid-19, let’s not cower in fear, but trust God. Don’t hide from God; instead make God our hiding place.