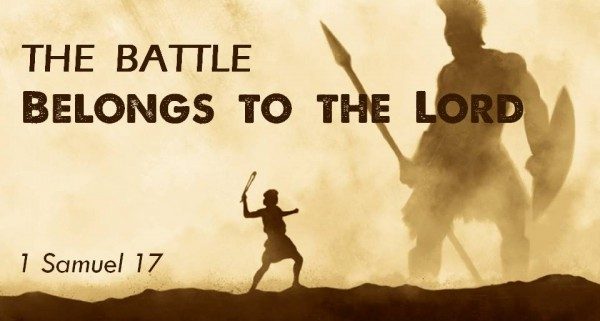 All this assembly may know that the Lord does not save by sword and spear; for the battle is the Lord’s. 1 Samuel 17:47

When Saul became king of Israel, one of his goals was to limit the power and influence of the Philistines. By the time we come to 1 Samuel 17, King Saul was successful. However, the Philistines did not give up easily. Here, the Philistines are trying to penetrate the highlands of Judah through the Valley of Elah, where they are met by Saul and his army. The Philistines and the Israelites arrange their forces on opposite sides of the valley. This makes it very risky for either army to begin an attack. By descending one slope, crossing the valley floor and wading its stream, and climbing up the other side, the attackers will make themselves very vulnerable. So the result is a stalemate; neither army dares to leave its position.

It is Goliath who provides a solution. He boastfully challenges anyone in Israel to a one-on-one confrontation. This encounter will then decide the battle; a victory for Goliath will entitle the Philistines to dominate Israel; on the other hand, a victory for whoever answers his challenge will entitle Israel to dominate the Philistines. Twice a day Goliath descends the valley slope and shouts taunts at the armies of Israel. He hopes his insults will make Israel angry enough to send out a challenger or perhaps begin a foolish attack. Goliath defies the ranks of Israel, the armies of the living God, and God Himself. Goliath, then, is God’s enemy.

It is the little shepherd boy David who answers his challenge. Yet, let’s not forget that David is the Lord’s anointed; he is God’s chosen instrument. David challenges Goliath not because he is an enemy of Israel, nor for the sake of his brothers, nor to save the honour of Saul and Jonathan. No! He challenges the giant because he is an enemy of God and David is God’s chosen instrument. David burns with a zeal and love for the Lord and the things of the Lord. The Lord’s enemies are his enemies. David also knows what is at stake here. He declares, “The battle is the Lord’s”. It is God’s struggle against Satan and the forces of darkness. The contest is not Israel against Philistia or David against Goliath, but God against Satan. It is God’s name that is being blasphemed; it is God’s honour that is at stake; it is God’s power and might that are being challenged.

Today’s text reminds us that the war between God and Satan rages on! Satan still hates and attacks the people of God and loves nothing better than to have us sin and fall from the faith. He loves nothing better than to destroy God’s Church. Christian soldiers, the war is on!!! Wake up and keep alert!!! Yet, we must realize that the battle is the Lord’s. Like David, we are called to be faithful warriors and instruments in the hands of God. We shouldn’t be scared and frightened into inaction, lose our perspective and focus on the might of the enemy. Rather, we should keep our eyes glued to the power of God and be filled with zeal for the Lord.

Soldiers of God, another year, another decade beckons. We know not what it will bring. What we know is that we are in a battle that is the Lord’s. What we also know assuredly is that victory is guaranteed by our Warrior God. We march forward in faith and with a deep resolve to follow Christ, for indeed, “Our Lamb has Conquered, Let us Follow Him!”