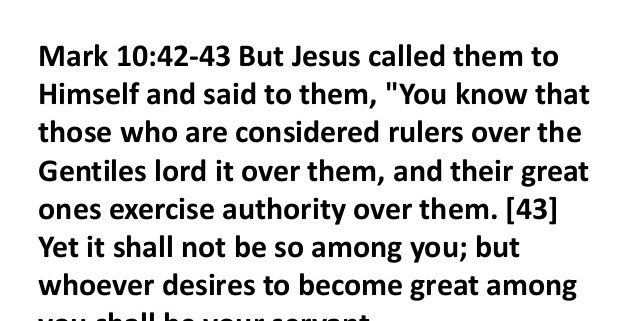 In this world where we are stewards over that God has given us and where we are given responsibilities and leadership roles both in the church and in society, we are taught by today’s text that we must approach leadership in the perspective of servanthood, that is our goal is not be a commander to lord and rule but a servant to attend to the needs of that which we have been given a charge.

As we reflect on today’s text, let us include verses 44-45 “and whoever wishes to be first among you must be slave of all. For the Son of Man came not to be served but to serve, and to give his life a ransom for many.”

The text arose out of a request by James and John, the sons of Zebedee, as recorded in the gospel of Mark, to be seated at the right and left hand of Christ in his glory. You can imagine that they considered their own importance and the honour and acknowledgement they would receive being seated at such a place of prominence. And even though, Jesus questions them as to whether they would be able to drink the cup that he is drinking alluding to his suffering and death and to be baptized in his baptism that is of the Holy Spirit, they still did not get the point that Jesus was getting to. Though they answered yes, Jesus’ response was what then led to the text. “The cup that I drink, you will drink; and with the baptism with which I am baptized, you will be baptized; but to sit at my right hand or my left hand is not mine to grant, but it is for those for whom it has been prepared.”

You could even surmise that the cause of the outrage of the disciples which followed, could be that they would have had the same thoughts as did James and John. It’s almost a natural form of thinking of the power and prestige that accompanies leadership, however as we approach stewardship and ministry in whatever form, remember we are engaged in servant ministry and servant leadership. Not as lords in the king’s court, but as sinners saved by grace and charged to tend and care for his sheep as we by his power and his might extend the love and grace of God to the world. Matthew Henry even draws this comparison in his commentary “… those that shall be put under your charge, must be as sheep under the charge of the shepherd, who is to tend them and feed them, and be a servant to them, not as horses under the command of the driver, that works them and beats them, and gets his pennyworths out of them.”

Jesus’ greatest example of such servant ministry, is shown where he washes the disciples’ feet. He explains to them that “…no servant is greater than his master, nor is a messenger greater than the one who sent him.” (St. John 13:16) In this great lesson that we know well, Jesus brings the understanding that we approach this ministry of servanthood with humility. We are all members of the body of Christ and labourers together in his vineyard. The important thing being that we have all been washed by his blood and anointed by his spirit which makes us one. When we hold on to these truths of leadership we will not be puffed up but will remain humble as he who humbles himself will be exalted but he who exalts himself will be humbled.

And lastly, Christ was obedient in his ministry, to death, even death on the cross. We have been given a privilege by God to serve and we must be obedient and faithful to him. For the truth is we are ultimately accountable to God who made stewards of his creation and “to whom much is given, much is required.”

Until next week, let our approach to leadership in whatever sphere be to serve the ones that we lead.

FRIDAY REFLECTION – Who is able to separate us from God’s love?

TUESDAY REFLECTION – The Person Behind The Gift
Scroll to top